Captured by Highway Patrolman in Yard

A Barbados sheep temporarily named “Barbie” is now in safekeeping at Charleston Animal Society after being picked up by Charleston County Sheriff’s Office Animal Control Deputies.

For the past two weeks, people living in a Ravenel area mobile home park kept seeing what they thought was a goat darting in and out of the woods.

One attempt by the Charleston County Sheriff’s Office Animal Control came up empty in the scorching heat earlier this month. But an area resident, also a highway patrolman, promised to keep an eye out for the animal. Last night, “Barbie” wandered into his yard, where he was able to close the gate.

This was the first sheep pickup for Charleston County Master Deputy Sarah Hake.“It’s a different kind of sheep. Most people who saw it thought it was a goat,” said Hake. “If anyone is missing a Barbados sheep with an ear tag, give us a call or visit Charleston Animal Society.”

Since 2009, 424 farm animals have come to the Society, including horses, sheep, goats, pigs, chickens and roosters.

Pick Me! SC is back! 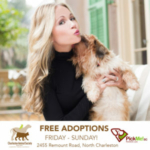