Ava suffered head trauma, lacerations and a broken jaw and is in guarded condition at Charleston Animal Society.

Charleston, SC – In a tragic accident August 31st, a man who was bicycling from Upstate New York to the Florida Keys was killed on U.S.-17 South near Adams Run in Charleston County. Kristopher Cotton, 36,  was traveling with his dog Ava, who rode in a small trailer attached to the back of his bike.

Cotton left New York in May and hoped to make it to the Florida Keys in October, according to an interview he gave in July to the Coastland Times on the Outer Banks, North Carolina. He told the newspaper that Ava loved to travel and said they had done long trips before, including one from Illinois to New York.

Cotton’s mother is making arrangements to have his ashes and Ava brought back to New York. A GoFundMe campaign has been started for the family to help pay for expenses.

Immediately after the accident, Ava, a seven-year-old brown lab mix, was brought to Charleston Animal Society for emergency medical treatment. “She suffered severe lacerations, a broken jaw and brain swelling from the accident,” said Charleston Animal Society Associate Director of Veterinary Care Leigh Jamison, DVM. “We got Ava stabilized and then took her to Veterinary Specialty Care to help with her more severe injuries, especially the cerebral edema.”

Once Ava’s brain swelling went down, she was brought back to Charleston Animal Society for continued lifesaving care until she can reunite with her family. “We are going to do everything we can to make sure this family is taken care of,” said Charleston Animal Society President and CEO Joe Elmore, CFRE, CAWA. “We are heartbroken for Kristopher’s family and are reaching out to our community partners to help the Cottons through this tragedy.”

Ava’s medical expenses are significant. Charleston Animal Society’s Medical Fund (Toby’s Fund) is covering the costs, thanks to donor support. At this same time, two other dogs in unrelated cases were also hit by cars and are receiving intensive care at Charleston Animal Society. If you would like to contribute to save Ava and animals like her, please visit CharlestonAnimalSociety.org/donate. 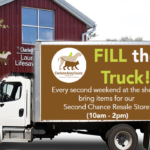